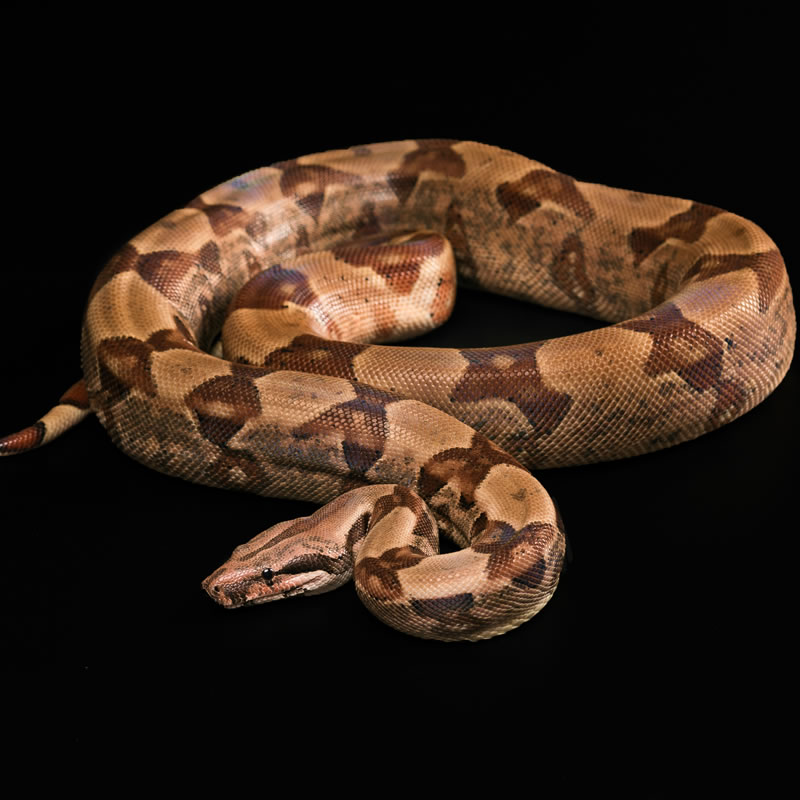 Boa Constrictors are large constrictor snakes that live in Mexico, Central America and South America. They can also be found on some islands in the Caribbean.

These remarkable snakes are highly adaptable to different conditions and can be found in a variety of habitats including rainforests, agricultural areas and deserts. They may be found in trees or on the ground. Although they are excellent swimmers, they generally avoid the water.

Boa constrictors are carnivorous and feed on a variety of small animals including birds, rodents, and lizards. Bats are among their favorite meals. They catch the bats by hanging in trees and snatching them as they fly by.

Fully grown boa constrictors average 6 - 14 feet in length. The largest ever recorded was 18 feet long. They usually weigh between 60 and 100 or more pounds once fully grown. They are not the largest or longest snake. The largest is the Anaconda, which also lives in the forests of South America.

Their coloration can be pinkish or tan with a dark brown or black pattern. Their patterns can vary to match their environment.

Boa constrictors are not venomous; instead they wrap their bodies around their prey and squeeze until the prey can no longer breathe. They are stealthy hunters. They do not move very fast; it is not necessary because they lie patiently and wait to ambush their prey instead of chasing it down. Boas have heat sensitive scales in their faces that help them to sense when prey is near.

Unlike most other snakes, boas are ovo-viviparous, meaning that they bear live young. Although they still hatch from eggs, the eggs are retained inside the mother's body until the young snakes are ready to emerge. They can give birth to as many as 50 or more young at a time after a gestation period that varies from approximately 100-150 days.

Boas mate seasonally. When a female is ready to reproduce, she excretes a scent that attracts males. After mating, the male and female will go their separate ways. Boas are solitary animals that do not stay in family groups.

The natural lifespan of a boa averages about 35 years. The oldest known of these snakes lived to 40 years and 4 months.